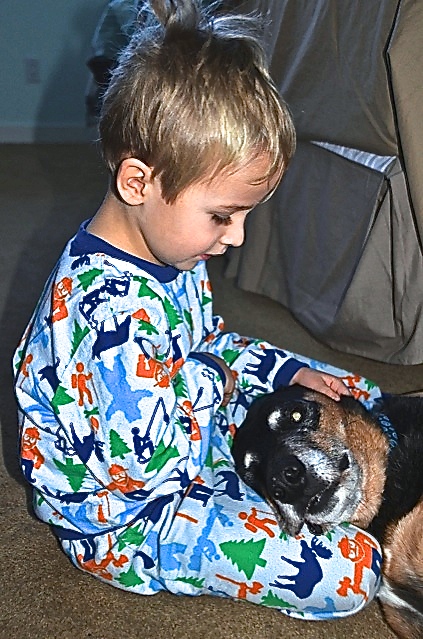 How can we know the depth of loss a five-year-old boy feels when his dog dies? How do we explain where his beloved pet has gone?

Chayton and his Mom lost their dog Kobe early one morning recently.

Tamara woke around 4:30 a.m. She wasn’t sure why at first, and then she heard unusual noises downstairs. She found their 12½-year-old Greyhound-Rottweiler cross in acute distress. Kobe was unable to sit up.   He died soon after in a veterinary hospital.

A few hours later, Chayton’s grandmother, Sharolie, who lives nearby, learned about Kobe’s passing. On her way to Tamara and Chayton’s home to offer comfort, she searched her mind for ways to help Chayton understand and to deal with the loss of their pet. Sharolie was confident she would think of something. After all, before retiring, she’d been a high school guidance counselor with all the creativity that job demanded, helping to extract teenagers from their self-imposed crises.

Chayton and Kobe were close. In fact, soon after Chayton’s birth, Kobe had appointed himself Chayton’s guardian. Long legged Kobe, who stood almost three-feet high, would step in whenever he sensed a possible risk to his young two-legged charge or to Chayton’s mother, Tam.

She said that once while walking in an off-leash park, a large dog had come charging over toward Chayton. Kobe placed himself between Chayton and the other dog. He just stood there, quietly and calmly, but clearly with intent. The other dog left immediately. Although gentle and unaggressive, his mere size served to discourage the other dog, as it did humans. He was so big, some folks joked they were tempted to throw a saddle on him.

During Kobe’s younger years, it was not uncommon for him to break up fights between dogs by placing himself between the two protagonists. “They always stopped,” Tam said. “We would watch that in awe.”

Kobe’s instincts were obvious while at a lake house owned by Chayton’s parents. It backs onto an unsettled area. A cougar was seen once strolling through their back yard. Bear scat is commonly found on nearby hiking trails. Coyotes can be heard calling to each other. So whenever Chayton was outside playing, Kobe would quietly place himself between Chayton and the wilderness that lay just beyond the back yard, always on alert calmly and quietly watching for signs of danger.

That morning, while Sharolie was en route to Tamara and Chayton’s house, a thought occurred to her. She stopped at a store specializing in items of interest for children. She chose a stuffed animal that bore a miniature likeness to Kobe. Even the fur on the ‘stuffy’ was soft like the silky hair on Kobe’s big ears.

“Let’s name this stuffy Kobe,” she told Chayton after arriving. He called his grandmother, Oma, her family’s traditional name for grandmother.   “It will help us to remember Kobe.”

“Where has Kobe gone, Oma?” he asked, tears streaming down the perfectly smooth skin of his photogenic little face.

“His spirit is still with us,” his grandmother replied, struggling to maintain her own composure. “His spirit is living on in your imagination, just like your imaginary friends. Why don’t we imagine that Kobe’s spirit is now in this stuffy? That way, Kobe will always be near you. So, now whenever you want to hold Kobe close, he will be right here for you to hug.”

For several days, Chayton carried the newly named stuffy, Kobe, around with him wherever he went. He slept with it and drew comfort from it, hugging it often. Kobe’s passing was the first loss of life he’d ever experienced.

His mom, Tam, also loved Kobe dearly. He’d been with her through many experiences, including the separation from Chayton’s father, Brent, three years earlier.

“Kobe was always there for us,” she said. “Wherever we went, so did Kobe. It’s in our photos . . . there he always was, sometimes with just his paw stuck in the picture, or his tail, or his nose. He was such a constant, loving, patient presence in his life. We are SO lucky to have had him as our constant presence for the time that we did!”

And for Tam, it was also the first loss of a life close to her that she had experienced in more than a decade, since her grandfather died.

In her grief, at times Tam was unable to hide her tears from Chayton, as much as she wanted to spare him the added discomfort he would experience from seeing her crying.   Often, she just couldn’t help it.

To her surprise and pride, every time the tears came, there was her young son Chayton, along with Kobe the stuffy.

“Here Mom,” he’d say, handing her the stuffy. “You need this right now.”

A few days later, Chayton was at his Dad’s place for his half week of custody. One evening, Chayton and his Dad were talking about Kobe’s passing. Brent had been close to Kobe as well. Tam and Brent had adopted Kobe as a puppy and had cared for him together until they’d separated.

“You know, Dad,” Chayton said. “I really don’t believe that Kobe’s spirit is in this stuffy like Oma said. But I sure do appreciate that Oma did this for me.”

This is a true story. 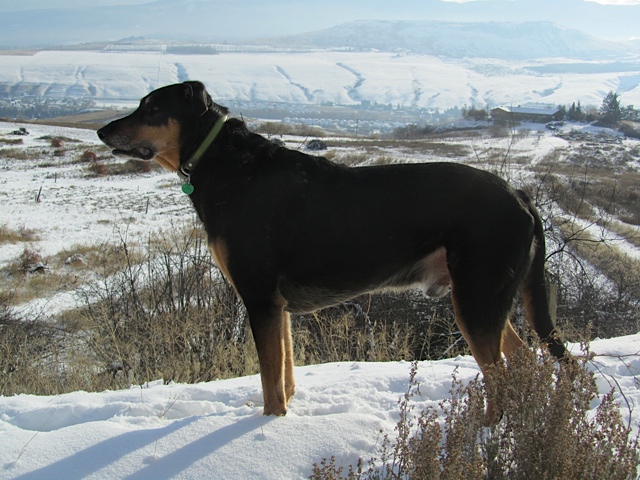