Willie Nelson was performing at the North Dakota State Fair one summer weekend.  A group of us decided to attend, and to travel in our newly purchased motorhome.  It seemed like a good idea, for the first couple of hours.

The state fair was in Minot.  Towns are few and far apart on the 250 miles of almost flat, exceeding hot and very straight highway between our city and Minot.  Someone said it was over 95 F that day.

Our motorhome was ‘experienced’.  That’s a euphemism that dealers use for vehicles with a past.  The first challenge came two hours from home.  The temperature gauge began to rise, slowly at first, and then it shot up all the way to boil.  We pulled over.  Stream was rising from the radiator.

Half an hour later it appeared to have cooled enough to attempt remediation. We poured what little drinking water we had into the radiator and made a sprint for the next town, barely visible on the distant prairie horizon.  Steam was again billowing from under the engine hood as the motorhome pulled off the highway into a gas station on the edge of town.

We opened the hood, unleashing clouds of steam. Someone had installed a screen on the front of the radiator.  The reason:  grasshoppers.  Carcasses of the pesky little critters had accumulated an inch thick on the screen.  While it had stopped them from plugging the radiator, and that’s a very good thing, the accumulation of said bodies had formed a solid mass blocking air circulation.

That’s when someone mentioned refreshments.   Hey, it was hot.  Another someone mentioned cold beer.  Tantalizing. One friend said he knew this small town and that it had a liquor store. But no one knew the law concerning alcohol in motorhomes. The driver chose the default: no booze on board.  There was grumbling.

At the dividing line between Canada and the United States, a US Border Services officer came on board.

“You guys carrying any alcohol?” he asked.

“No,” the driver replied truthfully, a wee bit smug.

“You’re kidding me!” he said with ill-concealed disbelief.

Grinning broadly, and confidently expecting to contradict the driver, he marched down the aisle opening cupboard doors and peeking into every cubbyhole he could find. Nothing.

The affable border guard began his return walk to the front and stopped half way.  He asked each passenger the purpose of our visit, where we were born, and the big one: how was our day.  At that point he learned more than he ever wanted to know about our experience with an overheated engine and especially about the driver’s refusal to have any booze on board.

Grinning, he walked on to the front of the motorhome, turned and gestured over his right shoulder with his thumb:

“The first bar is about 200 yards down on your right,” he said, chuckling.  “Sure looks like you guys are ready for a cold one.  Enjoy your visit!”

It took more than an hour of concerted effort in that bar to quench all of the pent up thirsts.

Minot is a small city.

The seven-story hotel was a pleasant surprise – modern, clean rooms, great bar and restaurant, and an Olympic sized swimming pool.  We checked them all out.

The next day, our group arrived at the fair grounds early for Willy’s concert in the open-air arena.  A sparse crowd was enjoying local country entertainers.  That made it easy for us to get close to the stage with our folding chairs.  We settled down to wait, wondering when Willy’s other fans would show up in force.  Meanwhile, we concentrated on matters at hand: it was hot and dry.  So were we.  Our group began immediate corrective measures, drawing from the contents of our coolers.

Thirty minutes before the legendary entertainer was due, his warm-up acts began taking their turns on stage.  We looked around.  Minutes earlier, only a few hundred people had formed the audience.  Now, where earlier that day cowboys had roped and ridden horses and steers, thousands of Willy fans had filled every bit of available space in the large outdoor arena and the surrounding fences. 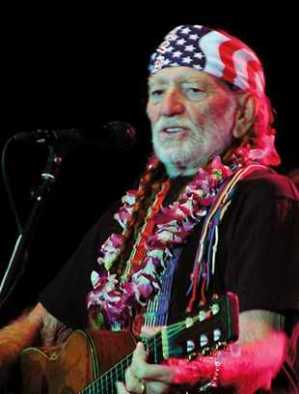 Willy’s concert was a crowd pleaser.   He obligingly performed his famous hits as well as songs from his newest album.  Not surprising, the audience didn’t want him to leave the stage, despite repeated encores.  Finally, the lights dimmed.

Most of our group, still in denial over the onset of middle-aged, weren’t ready to shut ‘er down, just yet.  We partied on in one of our group’s rooms.

The next morning was grim for many.

Much coffee would be needed for resuscitation.

A few of us willing to get vertical set out for the hotel restaurant and its coffee supply.

As we approached the first jog, we heard music coming from a room around the corner farther down the hall.  Must have been a Willie Nelson fan, we reasoned.  The voice was unmistakable.

“Someone’s got their radio turned up too fuckin’ high,” one of our group complained, grumbling about the effects of loud sounds on fully-developed hangovers.  “Damned inconsiderate if you ask me!”

We turned the first corner, then the second.  The music kept getting louder.  Another one of our bunch complained.

An open door appeared.  A guy was sitting on a bed, guitar on his lap, with long hair, beard and cowboy hat, singing his heart out.

Yep, there he was.  Willie Nelson, in person.

Willy meant it.  Much to our delight, he went back to playing the Nelson classic we’d interrupted.

And yes, you could say just about then, we were doin’ real fine, Willie, thank you very much.

Those bragging rights got lots of mileage for weeks.

4 thoughts on “Willie Offers A Bonus”