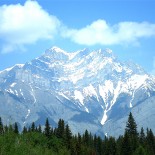 Welcome to my Blog!

If you look at the back right-hand side of a Canadian $10 bill, you will see an old veteran standing at attention near the National War Memorial in Ottawa. His name is Robert Metcalfe and he died last month at the age of 90.

That he managed to live to that age is rather remarkable, given what happened in the Second World War. Born in England, he was one of the 400,000 members of the British Expeditionary Force sent to the mainland where they found themselves facing the new German warfare technique – the Blitzkrieg.

He was treating a wounded comrade when he was hit in the legs by shrapnel.

En route to hospital, his ambulance came under fire from a German tank, which then miraculously ceased fire. Evacuated from Dunkirk on HMS Grenade, two of the sister ships with them were sunk.

Recovered, he was sent to allied campaigns in North Africa and Italy . En route, his ship was chased by the German battleship Bismarck .

In North Africa he served under General Montgomery against the Desert Fox, Rommel.

Sent into the Italian campaign, he met his future wife, a lieutenant and physio-therapist in a Canadian hospital. They were married in the morning by the mayor of the local Italian town, and again in the afternoon by a British padre.

After the war, they settled in Chatham, Ontario, where he went into politics and became the warden (chairman) of the county, and on his retirement he and his wife moved to Ottawa. At the age of 80 he wrote a book about his experiences.

One day out of the blue he received a call from a government official asking him to go downtown for a photo op. He wasn’t told what the photo was for, or why they chose him. ‘He had no idea (at the time) that he would be on the bill,’ his daughter said.

And now you know the story of the elderly veteran on the $10 bill.

3 comments on “Lest We Forget”

This entry was posted on November 10, 2019 by James Osborne in Collected Short Stories.