Here’s a story picked up by the local media outlet, Castanet News, about how I celebrated my 80th birthday, albeit twice delayed, first by Covid-19 and last summer by local wildfires. Enjoy: 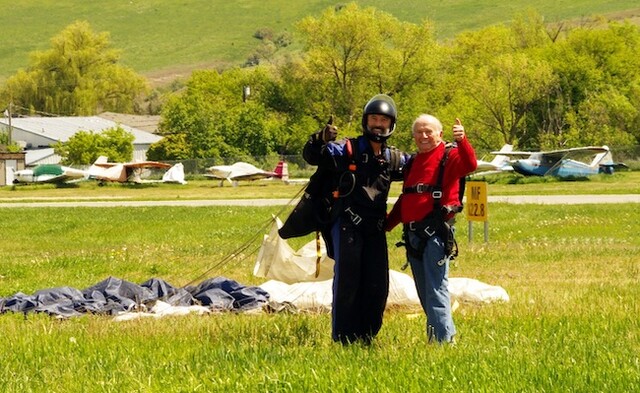 A Vernon, British Columbia author jumped out of “a perfectly good aircraft” to celebrate his 80th birthday.

James Osborne belatedly marked the milestone on Sunday, even though he’s now 82.

The jump had originally been planned for 2020, but had been postponed first due to the COVID-19 pandemic and last summer by local wildfires.

Osborne, author of the Amazon bestseller THE ULTIMATE THREAT, said he made the parachute jump “to celebrate the privilege of having enjoyed our amazing planet for eight decades. Not all that many people are so fortunate.”

Osborne did a tandem jump with Skydive Okanagan, freefalling from 10,000 feet and then parachuting the final 5,000 feet.

The descent took about 40 seconds.

“Don’t be surprised if that skydive becomes a segment in my next novel,” he joked.

The Vernon author’s debut novel, THE ULTIMATE THREAT, made it onto Amazon’s bestseller list twice – the first time at No. 1 and again in second place, between reprints of two books by Tom Clancy. “Nice company,” Osborne said.

His other books include THE MAIDSTONE CONSPIRACY, the first of a suspense trilogy, and winner of a Best Suspense Novel award from McGrath House Agency in London, U.K. A collection of his short stories called ENCOUNTERS – Tales of Living, Loving & Laughter, also won first place in an international competition sponsored by The Critique Group.

His most recent novel, THE PLOT TO ASSASSINATE SECRET SHEPHERD, is the second book in the trilogy. It was described by New York book publisher, Lois W. Stern, as “a magnificent story of love and hope prevailing in a world under siege.”

The final book in the trilogy is expected to be released sometime next year.

Osborne says parts of the plots in his novels were inspired by his own experiences as an investigative journalist, army officer, college teacher, vice-president of a Fortune 500 company, business owner, and parent.

10 thoughts on “Skydive Picked Up By Media”