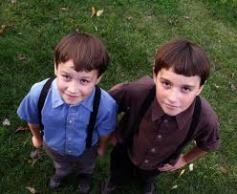 One weekend their parents agreed Tommy could sleep over at his friend Nick’s home.  The boys were seven.  It would be their first sleepover . . . and their last.

Nick’s Mom was a warm, kind-hearted motherly soul who spoke little English.  No need. The smiles that danced in her sparkling blue-green eyes spoke volumes.  She and Nick’s Dad had come here from Ukraine many years earlier.

Over supper, she encouraged Tommy to learn a few words of Ukrainian.  They coincided with English words for common expressions like ‘hello’ and ‘goodbye’, ‘good morning’ and ‘good night’, and items like ‘knife’, ‘fork’ and ‘spoon’.

Tommy found it interesting and fun to learn a little bit about another language.  He concentrated hard, trying to remember and to pronounce words that were awkward to his tongue.  He wanted very much to please Nick’s Mom.

Later that evening, after the boys went upstairs to bed, Nick generously offered to teach Tommy more Ukrainian words.  He was like that.  Tommy agreed eagerly.  They worked at it until Nick’s mother called sternly for them to quiet down for the night.

When the next morning came, Tommy got his first opportunity to show off his newly learned Ukrainian.  He’d come to like Mike’s mother a lot and wanted to please her.  So, when Mike and Tommy walked into the kitchen Tommy greeted her, as best as he could remember, with one of the Ukrainian phrases she’d taught him during supper.   Before coming down, Mike had rehearsed him again how to say, “Good Morning!” in Ukrainian.  As soon as he said it, her face lit up with a beaming smile.  Tommy was so proud!  She warmly replied: “доброго ранку!”

That confirmed she was pleased with his efforts, and was impressed.  Tommy was delighted that he had pleased her.

Tommy and Nick sat down for breakfast at the kitchen table.  It was Sunday morning and the family was assembled: Nick’s parents, his two sisters, one brother . . . and the two of them.  It was obvious where Mike had come by his engaging smile – his Dad also sported a massive beaming smile.  His parents were a perfect match.  His Dad’s always-happy face lit up a room wherever he went.

Encouraged by Mike and his Mom, Tommy was eager to show off even more, and to please everyone with his newfound grasp of Ukrainian.

Tommy picked up the glass of fresh milk where he was sitting and promptly rhymed off the words for the milk and the glass that Mike had carefully schooled him on the night before, and coached him again in the morning.

Nick’s mother happened to be holding a huge cast iron frying pan filled with scrambled eggs.  It crashed down onto her massive wood-fired cook stove.  Her eyes widened and her mouth opened, speechless.  A stern expression came over his father’s face, but he couldn’t hide the laughter in his eyes.  His brother made no such effort.  He burst out laughing.  Nick’s sisters seemed undecided whether to laugh or feign shock.  They turned away.

Nick’s mother pointed her finger sternly at Nick and then toward the door from the kitchen leading upstairs.  Nick slinked out, presumably up to his room, where his dastardly plot had been hatched the night before.

Within minutes, Tommy was heading down the road toward his home two miles away . . . alone and without breakfast.

Eventually, Tommy learned the Ukrainian words Nick had taught him, when translated into English, were the ‘mother’ of all profane four letter words.

Like most boys growing up as friends, Nick and Tommy managed to chalk up many adventures, both on their own and from watching the bigger boys at school ‘do exciting things’, whenever they’d let them hang around.

One day, the two were bicycling home together from school.  They came to the top of a hill and saw a group of big boys standing around a small fire of twigs and dead grass.  It was in the middle of the gravel road.  They were throwing stuff into it.  Nick and Tommy put their bikes down and walked over.  They stood back a bit, wondering what was going on.

The big boys kept throwing shiny things into the fire.  All of a sudden, there was a loud ‘pop’ from the fire and Tommy’s right earlobe started to sting.  He said it felt like his earlobe was being squeezed with pliers.  He grabbed it, thinking he’d been stung by a bee or bitten by a blackfly. The big boys laughed at the ‘pop’.  They didn’t know he was hurting.  Tommy shouted and kept grabbing at his right earlobe.

Nick took one look and his eyes flew open wide.

“You’re bleeding!” he yelled.   He pulled Tommy toward their bikes.  They hopped on.  Nick watched his friend carefully all the way home. Tommy’s mother was upset.  She did the first aid thing. She was used to it by now. Nick stood there deeply concerned.

Tommy didn’t know then what had happened.  Nick thought he did.  He feared Tommy had been shot.

Turns out the big boys were throwing .22-caliber rifle shells into the fire and waiting for them to explode.  Tommy’s mother was furious when Nick explained.  The hot shell casing of one had hit Tommy’s earlobe after exploding in the fire. 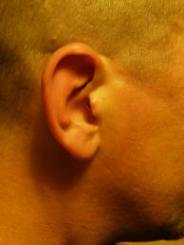 The bullet, the lead part of the shell, was much heavier and had stayed behind in the fire. The damage was minor.  Any real danger was negligible.  Truth was, Tommy did most of the damage by pulling and scratching his earlobe, causing it to bleed a little . . . ever so little.

“Sleeping Over” is Copyright 2013 By James Osborne  All Rights Reserved

One thought on “Sleeping Over”