We all know legends grow with retelling.  This one’s no exception.  It’s about a gold boulder . . . and how it caused a murder. Or did it?  We’re not sure. Nor are we convinced about the rest of the story . . . but that won’t stop us from telling you what we think we know.

The core question is . . . did a boulder of raw gold really slip from the hands of a murderer, roll down a mountainside and disappear into a deep lake?

It all began in the 1890s.  Back then, prospectors were scouring the mountains of Canada and the US.  Some struck it rich on gold, but most left empty handed.  A few were murdered and their riches stolen.  The stories abound.

This legend – or, legends – of the gold boulder began on Kootenay Lake in the interior of British Columbia, Canada’s westernmost province.

One version is full of intrigue, betrayal and murder.  Another is much less sensational but more likely to be true.  Well, perhaps. Chances are, we’ll never know for sure.

That story tells of a prospector working his claim on a mountain stream above Kootenay Lake coming upon traces of gold. Developing the site turned into a bigger job than he expected. So he returned to a nearby settlement, where he and his wife had a home, to look for help.  He located an experienced miner, took him home and the two made plans to develop the prospector’s claim.  He didn’t know that his attractive young wife and the miner had already become, shall we say, quite familiar while he was away prospecting.

The men took the daylong trek back to the claim and went to work. The prospector had promised the miner a share of all the gold they found. Their hard work was rewarded with an abundance of gold flakes and small nuggets.

Spurred to even greater action, the pair worked feverously to convert the claim into a mine. Lo’ and behold they uncovered an outcropping of gold.  It took days of strenous effort, but eventually the outcropping proved to be a huge boulder, apparently of solid gold.

In this version of the legend, the size of the boulder is unclear. Suffice to say, it was so large both men were barely able to move it.  They decided to lower their find down the mountainside to the lakeshore, using ropes and pulleys attached to sturdy trees.  That’s where their boat was moored.  The two set to work building a scaffold on shore to lift the boulder into the boat.  From there, they’d transport it to a buyer . . . and collect their fortune.

Construction of the scaffold took several days, longer that one might expect. You see, the work kept being interrupted by drunken celebrations and hangover recoveries.  Meanwhile, the boulder remained where they’d found it.  The miner couldn’t get the hugely valuable gold boulder out of his mind, nor for that matter, thoughts of the prospector’s attractive wife. Not surprising, an argument broke out one drunken evening. A fight ensued. The miner is said to have grabbed a rifle and shot the prospector.

The miner realized he needed to make a run for it. But he wasn’t inclined to leave the gold boulder behind, nor the newly created young widow. He decided to enlist gravity to help hime move the mammoth nugget.  His plan was to roll it down the mountainside to the shore. However, he overlooked one key element: how to stop the boulder when it reached the shore.

So down went the boulder through the forest, gaining momentum as it went. It bounced onto the rocky shore and with a mighty splash, disappeared into the lake. Some say the lake is 450 to 500 feet deep there just off shore.

The legend says the miner sought to persuade the prospector’s wife to accompany him as he fled, empty-handed. Turns out he would be fleeing not only empty-handed but alone as well. Before he got away someone, perhaps her, turned him in to the police. He was arrested, tried and hanged.

Now, the other version:  It has the best claim to legitimacy – that is, its a bit less tenuous.  It’s greater claim to being true, and just a tad more persuasive, is based partly upon a news story having been published about it, rather than just being retold. The story first appeared on April 23, 1894 in a local newspaper of the era, The Nelson Tribune. That story credits discovery of the gold boulder to a man out searching for lost cattle. Yes, really!

Tom Lymbery, a Kootenay Lake native and historian, directs the curious to that story, too, with a mischievous twinkle in his eye. That one tells us that a man named Randal Kemp found the infamous boulder. When interviewed by The Tribune back then, Kemp said that he, along with a friend and brothers Jim and Bill Cockle, were in two boats searching a bay off Kootenay Lake for lost cattle.

They pulled into shore for a rest. Kemp said he sat down and leaned against a large boulder. While resting, he poked idly at the boulder with a prospector’s axe he was carrying. The axe kept sticking in the ‘rock’. After clearing away overburden, the four men were startled to discover the rock was almost solid gold.

The four took samples, and measurements. The lump measured 27 inches long, 14 inches deep and 12 inches wide.  They determined a boulder that size would weigh 47,855 ounces.  At that time, gold was valued at $18 an ounce, promising the four men a fortune estimated at $250,000 each.  [At 2018 prices of between $1,300 and $1,400 an ounce, the boulder now would be worth between $62 million and $67 million. Little wonder there have been dozens of attempts to find the boulder.]

The four men are said to have developed a plan to retrieve their find and sell it.  They would lower the boulder into a sturdy boat and take it to a local community, Grey Creek, where they would seek a buyer. One end of an inch-thick rope was fashioned into a sling and placed around the two-ton boulder. Two skids were built and the boulder rolled onto them. They would lower the boulder, using the skids and pulleys attached to trees, down the shallow slope and into the boat. 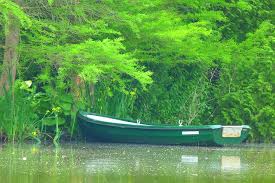 At first, everything went according to plan. But the heavy weight proved too much for the rope. It broke. The unfettered boulder rolled down the mountainside, over a cliff and landed on the boat, reducing it to rubble.  It is said to have proceeded to roll on down a steep underwater incline into the depths of the lake. Recovery of the boulder was out of the question. No one knew the depth of the lake. Guesses ranged from 400 feet to the equivalent of the height of the mountains bordering it, thousands of feet high.

Many have visited Grey Creek in search of the infamous gold boulder. The community’s welcome sign brags about the legend. Throughout his life, Tom Lymbery, Grey Creek’s best-known resident, has enjoyed a ringside seat to these legends, and their numerous variations. When you ask Tom which of these legends, or others, are true you will receive only a smile in reply.

As for the legend itself, so far no one has proven or disproven the existence of the gold boulder. So the search – and the legends – carry on.

‘The Gold Boulder’ is Copyright © 2018 by James Osborne.  All Rights Reserved

12 thoughts on “The Gold Boulder”