A bucket of rocks was blocking my way as I started to climb into the passenger seat of the light plane.

“Oh, I forgot about those,” the pilot chuckled. “Grab a couple and put the rest on the ground outside, okay?”

Minutes later we were airborne in the two-seater aircraft. Holding a rock in each hand, I couldn’t resist the obvious question.

“What’s with these, George?” I asked, shouting over the roaring engine as we gained altitude from the grass airstrip below.

“You’ll see in a minute,” he shouted back. A mischievous grin danced across his deeply tanned face.

George Ross banked the small plane and pointed it west across Lost River Ranches. His 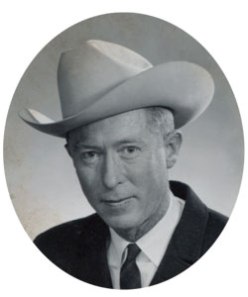 home was near the eastern border of the vast spread. His brother John, also a pilot, lived at the western end of the beef cattle operation they owned together. Their homes were 90 miles apart.

George was showing me why two aircraft and a dozen riders were needed to patrol the massive ranch, founded in the late 1880s by his grandfather. He’d explained before takeoff that Lost River Ranches covered a staggering 273,000 acres. It spanned a huge swath of land on the prairies of southern Alberta. Ranchers call it short grass country – where annual rainfall is so limited it’s borderline desert. Most years, 100 acres of prairie grass are needed to support just one head of cattle.

It was early afternoon and visibility was good from 1,000 feet. Below, numerous ravines interrupted the undulating prairie looking much like long-legged centipedes wriggling their way down to dry creek beds. Water’s found in those ravines only after infrequent rains, and in the spring given enough winter snow. For now, the bottoms of the ravines were covered with a mixture of brown and green grass, and scrub bush. Occasional groves of trees acted like magnets attracting cattle to their shade.

The aerial view helped explain the ranch’s name. At the end of the last ice age 12,000 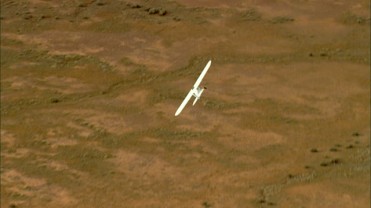 “Are those your cattle?” I asked, pointing down to a small herd grazing in a deep ravine.

“Yup,” George replied. “At roundup time, John and I fly over those ravines. We find dozens of head. There’s no way riders on the ground can spot them.

“That’s where the bucket of rocks comes in,” George said with a grin.

Ah, hah, I thought, rolling the rocks around in my hands. Finally… here comes the answer.

Now, before proceeding it’s important to note that it was August 1963, long before the widespread introduction of affordable mobile phones.

“Look in the pocket,” George said pointing to the passenger side door. “You’ll find a notebook and a bag of rubber bands. When we spot some cattle, we write down the number and location on that notepad, tear off the page and wrap it around a rock. The rubber bands hold the notes in place on the rocks. Then we fly over the riders and drop the notes.”

“Oh no! But, oh boy, I’ve been tempted a time or two,” he laughed. “We’re careful to drop them well away from the riders.”

“Nope,” I replied glancing at the dual control yoke bobbing and swaying on its own in front of me.

He let go of the controls as I lunged for the yoke on my side. The plane wobbled, and dipped up and down a bit, but regardless George concentrated on writing a note. My seat was too far back for my short legs to reach the foot controls… probably a good thing.

George motioned for me to hand him one of the rocks I’d dropped hastily on the seat between my legs. The plane took another clumsy shallow dive as I passed the rock with my left hand, my right on the controls. Sweat was beading on my brow.

In the bottom of the main window on his side was a smaller one the size of an envelope. George opened it and thrust the paper-covered rock out. He took back control and circled sharply. We watched the white object drop quickly and then disappear into brown grass about 100 yards from two riders. One urged his horse to a gallop toward the spot.

“There you go,” he said. “Now they’ll know where to find those cattle we saw.”

This ‘innovative airmail’ was my second surprise of the day… and just as educational as was the first.

Earlier that morning, after a crack-of-dawn breakfast of pancakes, multiple eggs and a small steak, George said he wanted to show me something in a corral a few miles from the ranch house. There, cattle were awaiting transport to market.

As we left the house, I instinctively headed toward the well-worn pickup we’d used the day before parked in front of the covered verandah. George motioned me to a big

shiny pale green Cadillac. The luxury car was almost new. After instinctively brushing my clothes before getting in, I asked as he drove off:

“Don’t you think we should have taken the pickup, George? It’s pretty rough out here.”

We were heading cross-country over uneven prairie terrain littered with rocks, sagebrush and gopher holes.

“Naw,” George said. “After all those drinks we had last night, my head’s a bit tender this morning. This here Cadillac sure does ride nice and smooth. And it has air conditioning. Just what we need don’t you think?” 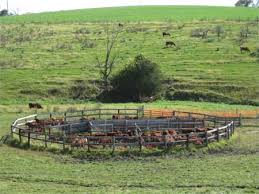 At the corral, George pointed to a steer and described why it would provide top quality steaks. Then he pointed to another. One of the ranch hands was watching. George explained that the cowboy was sitting astride a cutting horse. This is what he’d brought me here to see in action.

George nodded and the cowboy guided the cutting horse with gentle movements of the reins into the herd of about 30 steers. Horse and rider headed for the first steer. The horse seemed to sense the targeted animal.

A remarkable display of teamwork followed.

The horse slowly walked toward the steer. As it got closer it began stepping gently to one side and then the other, gradually isolating the steer. Occasionally, it would lunge quickly one way or the other as the steer tried to make a break for it. Most amazing, the horse seemed to anticipate the steer’s intentions. Its eyes never left the steer. The cowboy barely moved. Finally, the cutting horse had separated the first steer from the herd over to one side of the circular corral. The rider dropped a lasso over the animal’s head and tied it to the corral’s top rail. 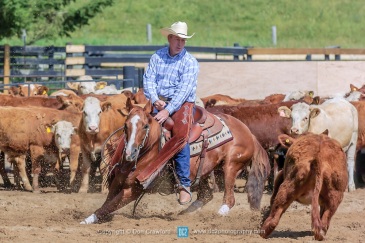 George explained that well-trained cutting horses need little guidance, only with subtle movements of the reins and pressure from the rider’s knees. The more experienced a cutting horse became the less direction it needed.

The cowboy guided his cutting horse back into the herd toward the second steer. Once the horse identified the targeted steer it was separated from the herd effortlessly, again with almost no guidance from the cowboy. He lassoed the second steer and tied it to the top rail of the corral next to the first.

The skill and intelligence of the cutting horse was mesmerizing. It seemed as if all that the rider had to do was be in the saddle. The horse did the rest. Dumb animals? Not hardly!

“Those horses are specially bred,” he said in answer to the look of awe on my face. “And carefully trained. A good cutting horse is a pleasure to watch… and valuable.”

On the way back to the ranch house and to our flight over the ranch in his plane, George invited me to his annual barbeque. It would be held the following month. Fellow ranchers and other friends were invited. Some would fly to the event in their own planes, landing on his airstrip.

Following our flight, George invited me to stay another night. It was the weekend and I was single. What the heck!

Daylight came much too early the next day. I met George in the kitchen for a cup of the strong coffee he’d obviously made to combat our shared hangovers. His wife Eileen and their two small kids had the good sense not to rise at 5 a.m.

“Bring your coffee,” he said impatiently. “I’ve got something that’ll surprise you.”

Out the back door he went. I scrambled after him.

When I caught up, George was standing at the top of a trenched walkway sloping down beneath a high mound of soil topped with grass. He walked to the bottom, pulled open a thick wood door and flipped on a light. We walked in and he quickly closed the heavy door behind us.

We were in a cold room. Hanging on hooks suspended from the ceiling were four sides of beef.

“You saw yesterday what good beef looks like on the hoof,” he said smiling at my surprise. “Here’s what it looks like heading for the supermarket.” He explained the sides were going to feed their guests at the fly-in barbeque in four weeks.

“The sides will hang to cure in this cold room until the barbeque,” he said. “Right now, you have another job.”

“What’s that?” I asked, still absorbing the experience.

“You’ve got to pick your steak,” he said.

George pulled a marker from the pocket of his jean jacket and walked over to the nearest side of beef. He looked it over carefully, top to bottom.

“There’s a good one,” he said. “That’s one of the best steaks here.” He reached over, grabbed the side of beef and wrote my initials on a rib.

Two months later I arrived for the fly-in barbeque, trying not to be overwhelmed by the assemblage of famous ranchers, celebrities, politicians, neighbors and a few ‘just plain folk’ like me.

“Come and get it!” George called out at one point. “Time to eat.”

Crews had opened the pit barbeques. unwrapped the sides of beef and placed them on

four tables covered with white vinyl tablecloths. On each was a side of beef, carving boards and knives. A fifth table, longer than the others and covered with a white linen tablecloth, held bowls heaped with green vegetables, mashed potatoes, gravy, salads, pickles and horseradish.

George’s guests lined up and carvers began filling their plates with enormous steaks.

George walked over to where I was standing.

“There,” he said, pointing to the second table. “Go have a look… get your steak.”

“One of these yours?” a carver asked. I shrugged, not sure where to look.

“What’s your name?” he asked helpfully. 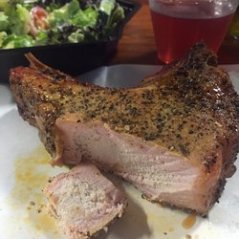 Sure enough, there were my initials, “JO”, on a perfectly cooked steak. When the enormous slice of meat landed on my plate I almost lost control of it. The steak was cooked medium rare. Just like George said it should be done.

I’ll never understand why that gifted yet self-effacing rancher made friends with this young man, but will always be mighty grateful that he did. During numerous encounters before and after that visit and the barbeque, that amazing man was generous enough to find time to teach me a great deal about life and living.

George was highly respected by ranchers and by business and community leaders. His wit, wisdom, natural leadership and wry humor earned him the nickname, the Will Rogers of Canada. Before his short life ended in 1971 at the age of 48 from a heart attack, George’s impressive list of accomplishments included helping to found and lead major regional and national agriculture groups, developing successful business ventures, writing an immensely popular column for a farm newspaper, and serving on several prominent community organizations including a university board of governors.

Some friends and experiences are never to be forgotten.

“Lost River Ranches – A Vignette” is Copyright 2015 by James Osborne. All Rights Reserved.

Note: Other than the portrait of George Ross, all other photos are used for illustrative purposes only and are not of actual scenes on Lost River Ranches .