To swim with dolphins. That’s all 15-year-old Tamara wanted to get from her family’s four-week visit to Australia.

Tam had learned about these highly intelligent sea mammals in her ninth grade biology class. She fell in love with them.

Tam felt that swimming with dolphins was reasonable compensation. After all,  she had to endure long hours of adult-level visits by her parents with their friends in half a dozen cities around Australia. And she had further justification: sharing time allocated for kid-oriented entertainment with her 12-year-old brother, who had his own definition of preferred things to see and do.

The family was told that dolphins were known to gather from time-to-time in a lagoon near a town called Monkey Mia. Getting there would involve a rugged two-day trek up the west coast from Perth, where they were on their last visit with friends. They had been cautioned that if they decided to go, no one could be certain that any dolphins, being ocean-going wild animals, would be visiting the world famous marine park while they were there. The dolphins tended to arrive and leave at random; there seemed to be no predictable schedule.

Tam was not to be deterred. The obligatory visits over, her family and friends from Perth set off on a grueling 550-mile trip north over crude roads, heading for Monkey Mia with little more than an outside chance they’d actually get to see dolphins.

Each family of four rode in a Toyota Land Cruiser their hosts had nicknamed ‘Whoopee’s’. The rough dirt roads soon provided painful confirmation of the reason for that term of dubioous endearment.

To make the trip especially interesting, the other family also came equipped with a teenaged daughter, meaning they had the company of two young women both launched on that stressful hormonal journey called puberty. And each family also came equipped with pre-pubescent sons, both of whom were convinced they’d rather be almost anywhere else but being forced to tolerate (in their words) a long, boring road trip to gaze upon an ocean they’d seen more than enough of already.

Early on the first day, the travellers were to learn the journey would not be without even more challenges. The route they were following consisted of little more than two parallel ruts in the dirt, the legacy of earlier vehicular traffic. At first glance these ruts seemed to be fairly shallow.

Contrary to appearances the ruts were in fact axle-deep in places and filled with an abundance of powdery red dust. This required occasional stops along the way in the blazing hot sun, while one high-centered vehicle was pulled free of the ruts by the other. 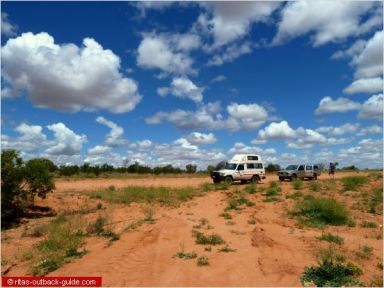 In later years, paved thoroughfares would speed travellers to their destination. But for now, these travelers were obliged to endure suffocating clouds of rust colored dust with the audacity to infiltrate nose, eyes, mouth, ears and food, and to permeate clothing all the way into sweat-soaked underwear.

Their hosts/guides reassured Tam’s family the weather would break soon. And so it did. The two-vehicle convoy was greeted by the leading edge of the rainy season. It solved the dust problem, but created another. Trying to stay dry took second place to the need for extracting one Land Cruiser then the other from a succession of mud holes into which the primitive road disappeared from time to time.

Another lesson: in due course it became abundantly obvious that the remnants of red mud were not easily removed from clothing that happened to be any color lighter than red mud.

The travellers arrived at the Monkey Mia wildlife refuge in the early afternoon of the second day, mindful they had a four-hour drive back to the nearest accommodation, possibly over a rain-soaked road.

For now, it was sunny and clear as Tam and her excited family dismounted and ran for the lagoon.

“Wow!,” said a wildlife conservation officer who would serve as their host. “Are you ever in luck! I think I see some dolphins coming this way! There haven’t been any here for at least two weeks! ”

Tam and the officer were on a rise of land overlooking the iridescent navy blue water of a lagoon the size of a football field.

“Yeah, I see some dorsal fins out there,” the officer said squinting through powerful binoculars. Tam and her family hurried down to the lagoon. She charged into the water first.

Tam waded out on shimmering white sand in the clear water until it was above her waist.

“Look!” her mother called guardedly, not wanting to frighten the dolphins she’d spotted swimming into the lagoon.

“Look!” her mother called again, more loudly this time, her voice propelled by the excitement that now also gripped her daughter.

Tam peered down into the water. Swimming toward her was an adult dolphin. Beside it was a baby. It was small, perhaps only a few weeks old. It stayed close to the adult, obviously its mother.

The sight sent shivers of excitement through Tam’s body.

Wow! she though. Oh wow! Is this ever awesome! This has to be the best day of my life!

She glanced over her shoulder at her family. They were smiling and waving with excitement as they waded into the lagoon. Even her pesky little brother seemed to be as excited as her.

And then her day got even better. The baby came up and swam around her legs. It wasn’t much more than two feet long. She reached down and felt it’s soft bck as it headed back to the safety of it’s mom.

Then a second adult e

ntered the lagoon. It swam over to her and nudged the hand she was holding out just above the surface of the water. Tam returned the gesture, touching the dolphin’s nose. She expected it to shy away. She was surprised when the dolphin remained, as if wanting to make friends. Tam swam around the big marine mammal cautiously at first, and then moved closer.

She gently ran her hand up the dolphin’s nose to its head and then stroked the soft skin along its back to the dorsal fin. The dolphin stayed there, seeming to enjoy the attention and the affection that Tam was feeling as she swam along side, patting and rubbing its back.

Maybe it’s sensing my love, she thought. She had no doubt this was so. Then the dolphin rose and shook its head, as if acknowledging the feelings in Tam’s heart.

She watched as the mother and her baby swam around the lagoon, much to the pleasure of the assembled visitors, now crowding into the water along the shore. All three dolphins began swimming among the legs of their human visitors, circling around and back, allowing themselves to be stroked and patted. They seemed to revel in the attention and the affection of their shore-bound fellow mammals.

Tam’s family and the others applauded. She overheard one of the wildlife officials tell the spectators that through their tracking program they believed the second dolphin was a sister of other adult, thus the baby’s aunt.

Much too soon, Tam heard her father call out it was time to go. He reminded her the family had a long drive ahead of them.

Moments later, as if the three dolphins had heard that call, they made a last tour of the lagoon among the spectators and then headed out to sea, their visit over.

As Tam and the crowd watched with delight, the two adult dolphins breached, leaping high into the air as if to bid them farewell.

The best day of Tam’s life had just got even better.

“The Dolphins at Monkey Mia” is Copyright © 2016 By James Osborne. All Rights Reserved

6 thoughts on “The Dolphins at Monkey Mia”