The neighborhood missed Keith and his family when they moved to the country.  He and his wife Elsabeth wanted their children to enjoy rural life.  But Keith would get a bit more than he bargained for.

Their ranch-style house offered a commanding view of the surrounding countryside.  It sat atop a high peninsula of land and soon was joined by a modern barn. The family had organized a barn raising.  It was a huge success — four stalls, a work area and a large hayloft.

The acreage became a haven for Keith.  He led a busy life as a successful businessman, entrepreneur and community volunteer.  He found welcome relaxation in the evenings caring for their horses, dogs, cats, plus an adoption that Keith didn’t expect or want . . . at first.

Among the improvements to the acreage was a corral for exercising their newly acquired horses.  There, a spirited horse one day chose to buck Keith off.  A decade later, he underwent back surgery as a result.  Landing on your head will do that.

Soon there would be other surprises that he and visitors to the acreage were to encounter.

Strangers would often arrive and cower fearfully in their cars . . . they’d been greeted by Bosley, an enormous Bouvier dog, and Sheba, an equally big Sheepdog. The two dogs loved to bound along, one on each side of arriving cars, barking loudly. Their huge faces would be level with the car windows as they peered in.

None of them could know what friends did – that Bosley and Sheba had personalities resembling affectionate teddy bears.  They’d happily accept a scratch behind their ears, rather than bite someone, every single time . . . coyotes and other predators excepted.

Their successor, Oliver, was an unusually tall male Boxer.  The family adopted him as a puppy.  From the start, his favorite place was on someone’s lap.  It calmed the fears of a frightened little puppy.

Oliver grew up into an oversized and still-affectionate Boxer.  And he never forgot his favorite place.  The family got used to chasing Oliver off their laps, much to Oliver’s disappointment.  Some visitors didn’t know that, yet.

One day, their friend Judi came to visit.  She liked dogs, and had known Oliver from a puppy.  And Oliver, now all grown up, loved petite little Judi. Predictably, while Judi was sitting on the couch and wasn’t looking, Oliver snuck up and slipped onto her lap.  Judi all but disappeared behind Oliver’s hulking body.  She had to be rescued by Keith.

And then there was Rowdy, the goat.

Keith’s children had a great sense of humor.  That’s how Rowdy arrived – as a baby billie goat, a.k.a., a kid.  It was their idea of a fun birthday present for their Dad.  He didn’t share their humor with quite the same enthusiasm. 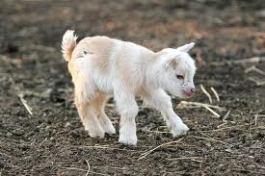 It didn’t take long for the rambunctious bovid to earn his name.

Eventually, Keith and Rowdy developed a relationship, of sorts.  Perhaps it was their similarities.  Keith was strong willed and so was the aptly named Rowdy.  The problem was, Rowdy seemed oblivious to what others thought about him.  He did whatever he pleased, despite Keith’s best efforts at training him to behave.

Rowdy hung out mostly in the barn, or more accurately, it was his domain.  When not lording it over horses, cats, dogs and other creatures that came within his jurisdiction, Rowdy could be found raiding the garden, or chomping on everything from fence rails to tin cans . . . or he’d be dining out on Elsabeth’s newly planted flowers, shrubs and trees.

Regardless of what Keith might have thought about his white-coated pet, Rowdy developed a strong affection for him.  (We have it on good authority Keith liked Rowdy, too, grudgingly, but didn’t want anyone to know it.)

Rowdy had been only a few months old when he adopted the practice of being inside the barn, waiting behind the door, when Keith arrived to feed the animals.  Rowdy would follow Keith everywhere, staying hard on his heels as Keith went about the chores.

One day, Keith was preparing to feed the animals when he heard Rowdy making plaintive noises.  For once, Rowdy wasn’t at his heels.  When Keith looked around there was no sign of the little white billie goat.  Keith scoured the stalls in the barn.  He even climbed up into the hay loft, certain Rowdy couldn’t get up there . . . but not entirely convinced.  And Keith scoured the yard outside.  Rowdy was nowhere to be found.  But Keith was still hearing Rowdy’s muted cries of distress.

He went back inside, again walking through the stalls and work area, looking around carefully.  The cries were louder.  Stopping to listen more intently, he leaned on a 45-gallon drum half filled with feed grain.

One side of the hand-made wooden top gave way beneath his elbow and flipped.  The edge almost smacked the head of a frightened Rowdy, his feet sunk deep in the feed grain.  He looked up at his owner, pleading with soulful eyes.   Rowdy wanted out, and he wasn’t kidding.

When Keith stopped laughing, he concluded Rowdy must have jumped onto the lid while his back was turned, trying to get closer to him, and flipped it, throwing himself down into the barrel.   His feet had become mired in the feed grain making it impossible for him to climb back out.

Rowdy remained full of mischief for the rest of his life, but he never tried that again.

7 thoughts on “Getting Rowdy”