Imagine this.  You open the front door and see your 11-year-old daughter bleeding from cuts to her mouth and face . . . her two front teeth are missing . . . her right arm is broken.

That sight greeted Tracey’s mother at their front door one spring afternoon.

The full story came out later in the emergency ward while a trauma doctor tended to Tracey’s cuts and secured her broken arm in a cast.

“And what tree did this little boy fall out of?” the physician asked as he began tending to Tracey’s injuries.

“First of all,” her Mom replied sternly. “She’s a GIRL not a boy, and SHE fell from the roof of our house onto a cement walk.”

With that, the pace of treatment accelerated immediately. Doctors and nurses scurried in all directions.   Tracey was rushed into x-ray.  And then quickly tested in excruciating detail for concussion and internal injuries and other broken bones.  Mercifully, nothing more than the obvious was found.

Through it all, her parents pieced together bits of the story as told by Tracey, speaking with broken teeth, a stitched upper lip, a fat lower lip and a swollen jaw.

Earlier in the day, Tracey and a neighbor boy had been on the roof of her family’s bungalow.  They were trying to find enough of a breeze to fly a kite.  Evidently, it was too calm on the ground.  The two pre-teens became frustrated, so up on the roof they went.  The slope of the bungalow’s roof was gentle, and much too inviting.  And getting up there was far too easy, as we shall see.

Once up, the friend held the tail of the kite while Tracey held the kite itself.  Both ran the length of the roof.  There was just one problem.  Tracey didn’t see a big hole in the roof . . . a skylight.  It was directly above the cement front step.  She fell through the skylight . . . headfirst.

It’s not clear whether Tracey was knocked unconscious by her fall.  She doesn’t remember.  But somehow, she managed to get up and push the doorbell.  Fortunately, her mother heard the bell . . . she wasn’t vacuuming or down in the basement.

That’s another story.  Here it is.

Tracey’s family lived on the edge of a prairie city.  Winters can be brutal.

A month earlier, heavy snow and cold weather were followed by a ground blizzard that blew around the clock for seven days.  It left deep snowdrifts blocking numerous city streets.   The fierce blizzard was so bad that schools, buses and other services were shut down on the storm side of the city.

Tracey and her sister Kim had been kept home from school.  The fierce blizzard prompted Tracey’s mother to arrange for the family to stay with friends.  But as the storm raged, the two children became trapped.  The family bungalow became surrounded by snowdrifts, making access almost impossible. Their mother was at work. Her father was away at a conference.

When Tracey’s mother arrived home to pick up the two girls, she took one look at her snow-shrouded home and called her friend’s husband for help.  He was forced to tunnel through a huge snowdrift to the back door, the only means of rescuing Tracey and Kim.  The snowdrifts had blocked all other avenues of escape: the front door, two patio doors, the garage side door and the double-wide vehicle garage door. 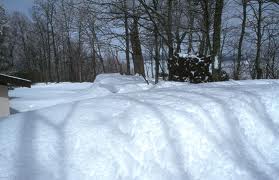 Tracey’s father learned about the storm and deep freeze temperatures after trying unsuccessfully to phone his family earlier that evening.  He tracked them down at the friends’ home.  Ironically, he’d been calling from the balcony of a hotel in Seattle; it overlooked a Japanese garden, just coming into full bloom . . . a stark contrast.  He left the conference immediately, flew home and arrived in a cab at the crescent where their home was located . . . to quite a sight.

Here’s what he saw:

Almost a dozen kids were taking turns tobogganing from the roof of their house down a long curled snow bank onto the street.  The blizzard had created a perfect – and novel – toboggan run:  the snow bank was so high it had buried a five-foot side fence, and reached up beyond the eaves onto the roof.

In the weeks following the story, intense shoveling was finally supplemented by of a bucket-equipped ‘Bobcat’ – there was a long lineup of orders for every front-end bucket machine in the city and surrounding area.  Everything was covered in snowdrifts: the driveway, front entry and the walk to the back door.  Even the pickup in the driveway needed attention – when the engine hood was raised, the entire engine compartment looked like a solid block of snow.  Fine granular snow had drifted in until the compartment was filled. 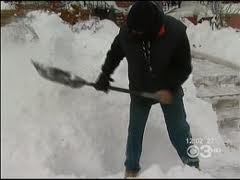 One snowdrift remained . . . the one that reached up onto the roof.  The snow bank seemed harmless enough to be left – it was next to a windowless wall.  Tracey’s parents were confident the warmer temperatures of the approaching spring would take care of it.

But that snowdrift provided Tracey and her friend with easy access to a high, inviting and almost flat surface – the roof.  She will admit her close call ‘cooled her jets’ for such exploits, at least for a while, but left her sense of adventure undimmed.  That was a good thing.  Her parents eventually recovered.  And that was a good thing, too.

Tracey went on to become a parent with three sons who each undoubtedly heard many times lessons from their mother’s own thirst for adventure.

‘The Kite’ is Copyright © 2013 by James Osborne  All Rights Reserved

3 thoughts on “The Kite”