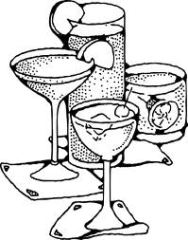 My friend Mike and I were equally to blame.  We were eight years old.  He got just as drunk as me, I think.  My memory’s kinda fuzzy.

We learned a lesson or two that day.

The scene of the crime was a big country wedding.  Two days of it . . . or so they said.  Mike’s cousin had married a pretty girl from down the road.  The first day of celebrations was at the bride’s family home, right after the ceremony. 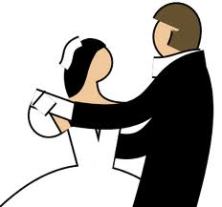 The second day was to be at the groom’s family farm.  Mike and I didn’t make it.  We were grounded.

The families of both the bride and the groom had moved to Canada many years earlier from eastern Europe.  We all lived modestly on marginal farms, but they knew how to party with enthusiasm, whenever there was a good reason.  A wedding was a very good reason. 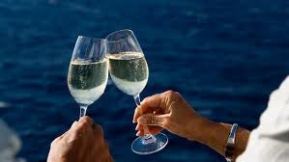 Nancy and Sidney’s wedding was the first party to come along in a long time.  It was mid-July . . . a good time of year . . . long after spring farm work and a few weeks before the first big crops of vegetables would be harvested and preserved for winter.

The first day of partying was at the bride’s home.  It was a perfect setting, overlooking a deep wide valley and a meandering creek.

Only the neighbor women doing the cooking could go into the house.  Mike’s mother and my mother were among them.  Oh, and Nancy’s father was allowed in – he was looking after all the booze.

The celebration began with more than two hours of music mixed with an abundant flow of booze.   Polkas and foxtrots mingled freely with beer, wine, whiskey, vodka and lots of home brew.  Tables, chairs and benches covered the lawn. 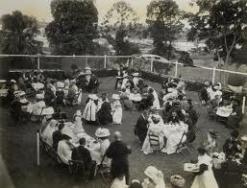 Then it was dinnertime.  Huge platters piled a foot high with meat, and massive bowls of vegetables crowded the tables, vying for space with an amazing range of homegrown treats and condiments.

Hungry guests occupied every available place on the chairs and benches arranged along both sides of the tables. 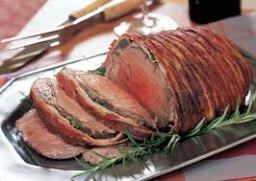 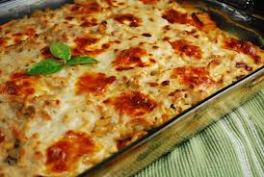 The assortment of tables were so laden with food there was hardly any room for half-empty wine or liquor glasses or beer bottles.  None of the guests wanted to relinquish their drinks.  They found or created reasonably level places on the lawn beneath where they were seated.

This was half a century ago, and eight year olds were noticed occasionally at these events, but mostly they were ignored as long as they stayed out of trouble.  All children of that day recall hearing the demeaning admonition: ‘children should be seen and not heard’.  And sometimes it was good to be not seen.  Too much visibility could lead to unwanted errands or chores.

This day, it was easy for Mike and I to be invisible; our parents and the other adults were preoccupied with the merriment.  First we sat on the grass in the shade of the tables and guests.  It was a very hot day.  Soon, we were crawling on the cool grass behind the chairs and benches.  I went down one side, Mike the other, at first playing some made up game.  It wasn’t long before both of us were sipping away on the glasses we were crawling by, most of them half full. 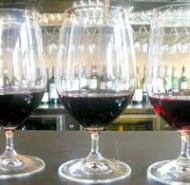 Hey, we were thirsty.  And it was a hot, sunny day.  I didn’t like the taste of beer.  Mike was okay with it.  But the wine tasted really good, especially the red kind.  And there were lots of glasses containing Coke and ginger ale . . . mixed with other stuff that made them smell funny.  Hey, remember . . . cold and wet are antidotes for heat.  That’s good, right? 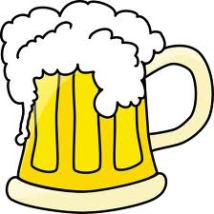 At first, we took just little sips from the glasses.  We didn’t want the owners to know some of their drink had gone AWOL.  That changed after we crawled over to the next group of tables.  For some reason we were feeling much bolder.

Maybe it was all the exertion – from our game and from trying not to laugh and draw attention.  The more we crawled the more and more generous we became for ourselves with the adults’ parked drinks. 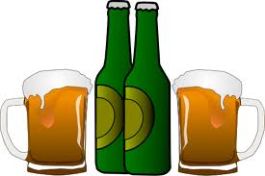 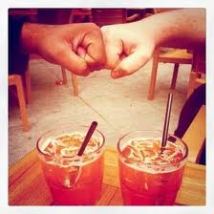 But finally, the inevitable happened.  Someone caught us.  Promptly, we were dispatched on an errand to get something from a cold storage enclosure down the hill.

The farm home was perched on the edge of a deep valley.  A creek wandered down the valley floor below.  The cold storage box was in a spring that flowed into the creek.  It was a steep walk down the hill to the spring and a long hike back up . . . even at the best of times. 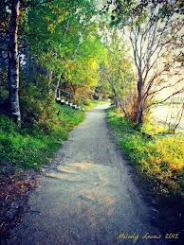 Mike and I made it down, all right.  We rolled and laughed most of the way.  Getting back up was another matter.  We had to walk.  There was just one problem.  The earth kept coming up and hitting us in the face.  And we couldn’t stop laughing.

Don’t remember whether we made it up the hill to the house with whatever it was we’d been sent to get. Very doubtful.  But somehow, Mike and I must have got to the top of the hill.  Well . . . I think so . . . ’cause someone apparently saw our behavior and told our parents.

I remember seeing Mike’s shirt collar being grabbed by his tall, husky Dad.  Mike’s feet were barely touching the ground as he was led away.  Just about then, Mom grabbed my upper left arm in the vice of her amazingly strong right hand.  That was her ‘official’ disciplinary hold when I’d done something she disapproved of.   The frequency in recent years had made that grip quite familiar.

Both Mike and I were hustled away from the wedding festivities . . . and from the view of chuckling guests . . . toward the road and the parked cars.  Mike lived 1½ miles away in one direction.  He was dumped unceremoniously in the back of his Dad’s pick-up.  He was on his back laughing away as the pickup disappeared in a cloud of dust.

We lived ½ mile away in the other direction.  Mom wasn’t about to wait for Dad to go get the car.  I recall being propelled down the gravel road, stumbling and falling quite often, listening to my thoroughly humiliated mother vent in tones that increased in volume the farther we got from the wedding celebration.

I’m not quite sure, but some of the alcohol I consumed must have come back up the way it went down, along with the snacks we’d scavenged.  Perhaps that’s why Mom threw a few buckets of ice-cold well water down the front of my clothes.  I was ordered to disrobe in the back yard and then hang my shirt and pants on the clothesline.

The sun wasn’t down, but Mom decreed it was bedtime for me.   I didn’t object, being pretty well out of it.

Our home had two stories.  The bedrooms were on the second floor.  There was a very long enclosed staircase, straight up.  My room was at the top, across the hall.

To appreciate fully what happened next, it’s important to understand everything that was located at the bottom of those stairs.  From the kitchen, you walked up two stairs to a door. Behind it was a small landing, and then you turned 90 degrees to go up the long flight of stairs.  Our coats, hats and mitts went onto hooks along two sides of the landing.  Shoes, rubber boots and winter boots all went on the floor under the coats.

Oh, yes, and there was a thunder bucket . . . a white enamel potty.  The lip as well as the edge of the lid were decorated with a blue pinstripe.  There’s a reason for having such a detailed knowledge.  Tell ya in a minute. 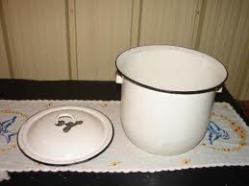 The role of the thunder bucket was the usual — it saved family members from trekking out at night and in winter to the outhouse, located on the far side of our back yard.  The potty didn’t get emptied every day.  It was supposed to.  But in fact, several days might go by occasionally . . . it could get quite full.  And yes, the distraction of the wedding excitement precipitated one of those ‘quite full’ days . . . the very same day Mike and I got drunk.

So there I was, lying in bed, hanging onto the edges trying to keep it from spinning and swaying.  I decided just then that I needed to pee.  It was still daylight.  I started down the stairs heading for the outhouse.  I didn’t make it.

At the top of the stairs, my balance deserted me.  I remember catapulting down, coming to rest with my face buried in my big sister’s coat hanging at the bottom of the stairs.  My right hand became imbedded in someone’s rubber boot and then my left hand went splashing into the thunder bucket with its nearly full contents . . . an obnoxiously odorous mixture of both ‘numbers’.

By this time, the rest of my thoroughly humiliated family had made their way home.  They were seated at the kitchen table, no doubt consoling one another when their only son, one hand caught in the handle of the thunder bucket, rolled out of the stairwell landing and onto the kitchen floor.

It seemed like hours before I got that mess cleaned up . . . all by myself.  Mom supervised the mopping up with an old towel, the hand wringing into buckets, the washing, the rinsing and the drying of floor and potty.  And Dad made sure the thunder bucket was scrubbed and washed yet again, and then polished and shined with car wax until it was sparkling clean, inside and out.

Evidently, Mike’s experience was a bit different . . . but no less instructive.

For the next few days I observed that he rode his bike standing up, and was mighty uncomfortable while sitting at his desk beside me in school.  He’d jump to his feet the second recess was called, and volunteered for blackboard duty a lot.  It wasn’t like him . . . he got over it quickly.

For a while we didn’t talk much about the wedding experience.  Now, we laugh about it, of course.    We’ve been friends for a very long time.  What a privilege!

Note: All images are from the public domain.