Rights of passage have their moments.  Some are memorable . . . some are funny.  Theirs was both.

Once upon a time in a far off land of golf lived a petite little woman named Janet.  She was married to a man eight years older who adored her.  As their family grew and left home, she began to sense the approach of a terrible thing . . . aging.

To be clear, she was fearless in almost every way, with one notable exception . . . not about being old, but that biggie for women: about looking old.  This explained why she had taught fitness, ate prudently, colored her hair, and began spending more and more time with the miracles of modern makeup.  (She really hated it when her husband George referred to her make-up bag as her ‘Magic Kit’.)

One day, Janet and George decided to extend an upcoming long weekend by a few days and devote the time to golf.  They loved the game.  Janet volunteered to book hotel rooms along their route and tee times at interesting golf

courses they’d not played before.

The first course offered a seniors discount on green fees for guest players over 55.  Janet happily signed George up for the seniors discount – he’d just turned 55 and this would be his first discount.  She didn’t tell him about the discount, deciding to surprise him. 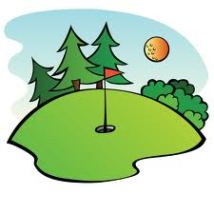 The couple arrived at the golf course well ahead of their 2:43 tee time.  They wanted to have lunch first.  When they finished, Janet volunteered to visit the pro shop and pay their green fees while George settled the lunch bill.  That seemed reasonable to George.

Janet had something else in

mind – she decided on an impromptu ceremony to present George with the receipt showing his first-ever senior’s discount.  She delighted in such things.

There was a look of ill-concealed outrage on Janet’s face when she arrived back at their table.  The receipt for the tee times was crumpled tightly in her dainty right fist.

“Do you know what that man back there said to me?” she asked through clenched teeth, referring to the unfortunate pro shop employee.

Not waiting for a reply, “Do you know what he said?” she repeated, the full fury of bruised dignity beginning to take flight.

George wondered what this was all about.  He suspected some exuberant male might have made the mistake of flirting with Janet.  She was, after all, quite attractive for a woman approaching – with great reluctance – middle age.  The poor unwitting sot would have been in for the shock of his life, George thought, smiling to himself.

“The nerve!” Janet continued, her indignity approaching its zenith.

George nodded, but continued to wonder what on Earth Janet was going on about . . . what senior’s discount?  Regardless, he’d learned long ago to look sympathetic but say nothing.

“Do you know what I said to him?” she demanded.  Her voice now half an octave shy of shrill.

“Uh, no,” George managed, hoping the unfortunate male still had his confidence and his other gender attributes intact.

“I asked him, ‘do I LOOK like a senior?’” Janet replied, stomping her foot, her ianger now soaring.  “I said to him, ‘Just how old do you think I am?’”

George knew only too well that no ordinary man could possibly withstand an onslaught of indignation from this petite five-foot-nothing bundle of fearsome kinetic energy.  He was convinced the poor guy by now must surely be on his way home suffering Post Traumatic Stress Disorder.

Janet had been a fitness instructor for years.  Although eight years younger than George, at 47 she looked closer to 35 and was proud of it.

That’s when Janet realized she’d crushed the milestone receipt in her hand with George’s very first senior’s discount.  She had intended to present it to George with a ceremonial flourish.  She opened her hand and began sheepishly to smooth the receipt out on the table.

The righteous indignation faded abruptly.  It was replaced by a mischievous smile that flashed across her pretty face.

“How about that!” Janet blurted out, chuckling.  “Look at this!”

She passed the slip over to George.

Note:  All images are in the public domain