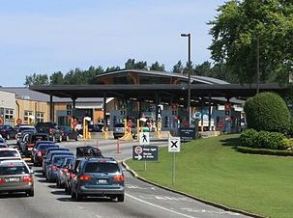 We hadn’t planned on visiting the United States that day . . . and certainly not that way.

The previous afternoon, we’d watched our grandson receive his pre-med science degree. Mighty proud we were. Yup, David was on his way to doctor school!

The next day, with the festivities over, my wonderful wife and I focused our minds on the six-hour drive home.

We’d stayed the night before graduation and the night after at a motel, a short drive from the university. It was unfamiliar. So were the neighborhood and the street names. But we knew GPS would guide us out of the city and on our way home.

Enter mistake Number 1. We bought a roadmap. Remember them? It helped us locate a short cut. This one seemed promising. GPS can make mistakes, too, you know. Off we went.

In minutes, we found ourselves heading in the wrong direction. Instead of east, we were driving south on a six-lane highway. The three lanes on our side were jammed with traffic. Then we spotted the sign, directing traffic to the United States Border Services booths! Oops. But hey, no problem. We could fix that, right? We were in the right hand lane. A good thing, we thought. We’ll just find an exit and turn around.

Sure enough, we spotted an intersection. I turned right. Oops again. It was a tiny dead-end street, only half a block long. I probably could have made a U-turn on the narrow street, but there was a parking lot to our left. It made sense to make the U-turn in the parking lot.

I made a sharp left turn into the parking lot, then realized what had looked like a drain across the entrance was in fact an exit inhibitor. That is, sticking up out of the strip was a row of sharp-pointed lugs that would destroy tires of vehicles trying to exit. Recognized it too late.

The parking lot belonged to a duty-free shop. That explained the no-exit strip. But the only legal exit would put us beyond that intersection we were sure would take us back toward our planned travel route.

I went into the store and explained our predicament. The reception from the two staff was underwhelming. I would have been happy with even slight bemusement, but shrugged shoulders? Whatever.

It became clear our only option now was to get back on that three-lane highway and head toward the US border. But neither of us had brought our passports. Another ‘oops’ . . . a big one.

Back on the highway, the US Border Services booth came into view, 300 yards or so ahead. We discussed how best to explain ourselves, and hopefully get back into Canada quickly and on our way home.

There it was . . . an exit on the left onto a narrow road. It looked like this might lead us right back into Canada. One small problem: we were in the right lane and that little road exited from the left lane. And the other drivers that we could see, appeared not too accommodating.

I started waving frantically with my left hand out the driver’s side window. Car after car kept going by. And we had to keep up with the flow of traffic . . . which means we were fast losing precious distance. Suddenly, a gap opened between vehicles in the center lane. A quick lane change. Half way there! But despite the stop-and-go traffic, that little exit road seemed to be approaching much too quickly. More frantic waving. A driver in the next lane waved us over. Whew! A grateful thank-you wave back. We did it! The left lane.

Then it was right there . . . the narrow turn-around road. I made a sharp left onto it.

That’s when it happened.

Two armed men in uniform came out of nowhere and stepped right in front of our car. I hit the brakes. More armed men and women showed up behind and beside them. What on earth? Now what?

I rolled down the driver’s side window, apprehensive. One uniform approached. His shoulder patch said Canadian Border Service Agency. One hand rested not so casually on the gun attached to his sturdy black leather belt. Not encouraging. 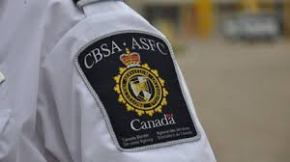 “And just what do you think you’re doing?” he said sternly.

I tried to explain what had occurred. The words didn’t come out well at first. I mumbled. It was a bit tense. I repeated myself twice; each time I seemed to be making more sense, to me at least. Couldn’t pull my eyes away from that huge sidearm. ‘Was that a Glock .45?’ I wondered.  My knowledge of sidearms could be engraved on the head of a pin.

Another try and the words finally came out in a semblance of the right order. He must have ‘got it’. The guard checked us out intently a second time, looked over my left shoulder into the back seat, and then glanced at the other guards. Eye signals, I guess. They relaxed and turned away, heading back to whatever they’d been doing before we rudely interrupted.

“That way,” he told us, pointing to the huge Canada Customs building. There were six or eight lanes, most of them empty with red lights above.

We pulled into the lane nearest the main building. There was a green light above it. Two cars were ahead of us. We discussed how to explain our plight to the customs agent. 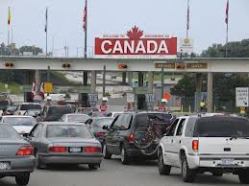 We pulled up to the window. The agent stuck out his hand, expecting passports.   Surprise registered on his face as I handed him our driver’s licenses. He studied our licenses as I explained what had just happened, gesturing toward the pair of armed agents still visible behind us.

“What was the nature of your visit to the United States?” the agent asked, ignoring my reference to his colleagues, still in sight.

‘Huh?’ I thought, glancing at my understanding wife.

I explained again what had happened, expecting him to contact his colleagues behind us for confirmation.

“What was the duration of your stay in the United States?” the agent asked.

Once more, I explained what had happened. I was calm . . . bemused, even . . . struggling to be patient and serious.

“Did you make any purchases while you were in the United States?” the agent persisted.

I began to wonder if this guy came with a reset switch.

‘What the hell?’ I’m thinking as I glance at my wife. Her eyes reflect my confusion, with her own hint of mischievous bemusement . . . but absent my growing impatience. She’s much calmer.

I described to the agent again what had happened, cautiously, with uncharacteristic reserve, carefully explaining why it would have been impossible for us to make any purchases in the US, having not even left Canadian soil.

The agent looked at me closely, intently, without blinking.

I returned his gaze, as best I could.

There was a long pause.

He handed back our driver’s licenses.

Then the agent, with his no-nonsense expression unchanged, tilted his head impatiently in the direction we wanted to go, unconvinced . . . and clearly wanting us out of his life.

I’d like to think the experience gave him something to talk about over coffee. It did entertain us most of the way home.

“The Route Home” is Copyright © 2014 By James Osborne. All Rights Reserved

4 thoughts on “The Route Home”