(Warning: This story contains descriptions that may be disturbing to some. But for those raised on farms: no surprises and a touch of humor.)

She stood there as if frozen, her back to the fence. Then she screamed; it was a piercing scream of terror. A headless chicken was staggering toward her, its wings flapping, legs churning… blood spurting from its severed neck.

I confess. It was thoughtless of me, upsetting my city-raised wife like that.

No excuses, but as a kid raised on a family farm I’d learned from early childhood about growing and raising our own food. We didn’t think twice about what had to be done. We just did it—weeding the garden, milking cows, dressing chickens.

But Judi was a city-raised girl.

At this point, I’m going to drag my friend Mike into this. He became an innocent accomplice in the distress I caused my good wife. Mike and I go back a long way. He and I were the entire first grade class in our one-room country school. Over time, our lives took us in different directions but Mike and I would reconnect every so often. We are privileged to have one of those rare and rewarding friendships.

One reconnection occurred while I was attending university. My wife and I were married, with two kids at the time. Mike and his family were operating his family farm 60 miles from the university town.

It was just after Christmas and Mike had invited us to visit. The two families were meeting for the first time. Our wives and children hit it off immediately. Our kids were of similar ages. Over the next months, our visits became frequent.

It was during one visit in the spring that Mike made a proposition: would we go half and half on a yearling steer, on a pig and on 50 chickens? Being a university student had put our family on a tight budget. This offer would save us hundreds of dollars in grocery bills. We jumped at the chance.

The deal was, Mike’s family would arrange for the steer, the pig and the newly-hatched chicks. We would pay for the feed and they would provide the housing and care. The two families would share other costs. I still think he got the short end of the stick, but he insisted. He always was a good guy.

That was the good side of the deal. It was consummating the other side that caused all the grief.

To save money the two families would take a weekend in the fall to ‘dress’ the mature chickens and get them ready for the freezer. The steer and the pig would to be prepared by a professional butcher, at a shared cost.

And so it came to pass, we arrived on the agreed weekend in the fall to visit and to complete the final part of the bargain – dressing the chickens.

Mike’s effervescent wife Carol had got up early the morning after our arrival. She came in for breakfast just as the rest of us were waking. She’d been out to build a fire under a large iron caldron about four feet high and four feet in diameter, filled with water.

“The water’ll be hot by the time we need it,” Carol said. We all understood what she meant. That is, all except Judi as it turned out.

We’d been advised to bring rubber boots. That made sense; we’d be working in the chicken run. Cleaning chicken droppings and other things from shoes is not a pleasant experience. It’s much easier to hose down rubber boots.

With breakfast over and everyone appropriately attired in old clothes and rubber boots the four of us headed for the chicken run. Mike said we had 34 chickens to dress. That meant 17 for each family, an impressive amount to our family. The rest of the 50 we’d bought hadn’t made it through the summer. Fatality rates are high among newly hatched chicks.

The water in the reservoir was hot and steaming in the cool morning air of early fall. Carol demonstrated by sticking a couple of fingers in and then withdrawing them rapidly, with a grimace.

Two big chopping blocks were positioned in the centre of the chicken run. They’d obviously been cut from large trees and saved. The rest of those trees probably had become firewood, perhaps some even used to heat the water.

“Here,” Mike said, handing me a large machete with an 18-inch blade. “I sharpened these the other day, one for you and one for me.” He held his up. “We’re all set.” To illustrate, he swung his machete down into the three-foot high chopping block. The blade sank easily into the end-grain wood. 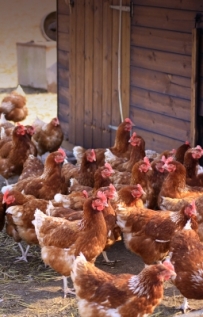 “You probably remember,” Mike said with his trademark beaming smile. (I’d grown up on a farm two miles away.) “You need to sneak up on them from behind.”

My wife was in the chicken run watching us begin to stalk the chickens. Now, chickens may seem not to be all that smart, but evidently they sense when someone or something is after them. My wife was amused by our efforts as we ran around trying to catch the elusive birds.

The trick, I recalled, was to catch the chickens from behind by their legs. That way they could be upended and taken to the chopping block where their head and neck could be extended more easily, and then the deed done.

It became a contest between Mike and I – which of us would catch a chicken first and lop off its head. Turns out we both got chickens to the chopping block almost at the same time. Okay, okay, Mike was a lot faster. By now, my wife was finding all this immensely hilarious. She had a bubbly personality, and laughed easily and loud; she was famous for having a delightful laugh that could be heard miles away, literally.

Mike and I looked at each other. We swung our machetes. Off came the heads. We dropped the headless birds on the ground, and turned to catch the next ones. This was normal procedure on the farm. For some reason, headless chickens will scamper around, blood spurting briefly. It’s a good thing for the meat, but to the unfamiliar it can seem quite gory.

Suddenly I heard a horrendous frightened scream. It was Judi. I whirled around, fearing she had been hurt. Judi had been standing next to the hot water reservoir

There she was, hands stretched out in front of her, trying to walk quickly backwards, but stumbling, struggling to keep from falling backward in the poop-littered chicken run. All the while, she kept staring down in fear at a headless chicken flopping towards her a few feet away.

That’s when I finally remembered that Judi had been raised in town. I should have realized this sooner. She’d never experienced this part of the process, the act of ‘dressing chickens’. When we’d talked about it earlier I’d made passing references and made assumptions – and had not explained precisely what that meant.

Make no mistake, Judi had more poise and courage than almost anyone you’re ever likely to meet. And we’re not sure exactly how she disappeared from the chicken run, but she was gone in a flash. Carol found her in the farmhouse. By then she was composed but adamantly refusing to go anywhere near the chicken run. She insisted on finding some other way to do her part, and she did, pulling pinfeathers

Mike and I finished our jobs with the machetes. Carol and the two of us dunked the carcasses in the scalding water to loosen the feathers. The three of us plucked the chickens and removed the innards. And a now perfectly calm Judi, firmly ensconced in the house, pulled the pinfeathers from most of the 34 chickens that we ‘dressed’ that day.

“Dressing Chickens” is Copyright 2015 by James Osborne. All Rights Reserved