People of a ‘mature persuasion’ know these things to be true: When having problems with your computer, ask your kids for help. If it’s urgent, ask your grandchildren.

And so it came to pass one day in our den. Our family had just received our first home computer with all of the usual accouterments: monitor, keyboard, tower, printer, router, modem . . . you know the drill. The fellow from the shop hooked up everything in a flash. He gave us a primer course on how to operate everything. It took even less time than the installation. No matter—my wife and I didn’t understand a thing he said.

Now, much of my career was spent working for high-tech companies. I made a determined effort to keep up with the latest developments in digital technology, fiber optics and the Internet. The truth be known, that effort did more to generate a false sense of knowledge than it did to instill any semblance of practical aptitude.

Fortified that day with this vast store of ignorance, I plunged confidently into learning all there was to know about our new computer system. The euphoria lasted 10 minutes, tops. The darned thing seized and adamantly refused to answer my commands. What nerve!

“Carrie!” I called out to our 14-year-old, the only offspring with the misfortune to be at home at the time. Our three daughters then ranged from early teen to adolescent. (Three teenaged daughters? Yeah, well that’s a story for another time!)

“Yes Dad?” I heard her answer from her room.

“This goddamned thing is frozen!” I said, loud enough that neighbors even in the next block could hear.

“Harrumph!” came the sound of my wife, admonishing me for cursing.

On such occasions, she’d clear her throat in that subtle way, just for me. She was mercifully reluctant to undertake in front of our kids the behavior modification of which her spouse was in such desperate need. Thus, the throat clearing came to be ‘the signal’ that I’d egregiously transgressed certain verbal boundaries. There must have been times when she had the clearest throat on the planet.

“Be right there Dad,” Carrie said, undaunted by my detour into the blue nether land of the English lexicon.

On arrival at our den, she declined my invitation to sit at the desk, implying this would take no time at all. It didn’t. She leaned over the keyboard and with a few quick strokes I was back in business.

“How’d you do that?” I asked, flabbergasted.

“It’s okay, Dad,” Carrie replied, trying not to betray impatience with her parent. “Just don’t do . . .”

I had no idea what she had told me not to do. And the darned kid was quick to pick up on the bewildered look in my eyes.

“Just call me if you get stuck again,” Carrie said, showing remarkable restraint for her young age. I understood the message: she was putting herself on standby. Good thing as it turned out.

On many subsequent visits, Carrie rescued me from computer purgatory. It took her almost no time at all. She’d spend much more time browsing our wall of books, evidently attracted to the knowledge lurking within. Books were my thing and apparently they were becoming hers too. That interest warmed the cockles of my heart. As it turned out, her attraction to books would answer a family mystery soon to unfold.

The books in our den included a few textbooks from courses at university. Among these were works by great thinkers like Aristotle, Socrates and Plato. I was quite fond of those guys, especially Plato, or rather of what little I understood. I kept their works hoping that one day I’d actually find time to read and perhaps even understand them. Good luck with that!

One day, while at work in the den my intuition signaled that something was not right. There was a gap in the meticulous lineup of books on one shelf. A book was missing! Most puzzling of all, the absent book turned out to be Plato. Until then, no one else had shown even a passing interest in any of the books, much less works of the great Greek philosophers. 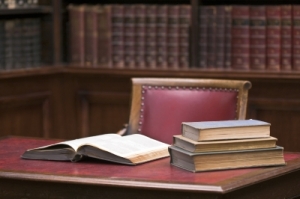 The errant Plato’s The Republic remained an enigma for weeks. After checking high and low with a sense of mission, it was nowhere to be found. I was certain of two things: first, I’d not taken the book somewhere to read, and, two, no one in the family had shown any interest in Plato.

Well, I was right on the first and wrong on the second.

One weekend, while engaged in some handyman work around the house my wife called sweetly to ask a big favor. That sweet tone is never a good sign, as husbands everywhere know full well.

“Honey, will you go and collect all of the dirty dishes from Carrie’s room?”

It was common knowledge among our family and friends that my wife refused to go anywhere near Carrie’s notoriously unkept domain. Anyone with the courage of Crocodile Dundee and a willingness to venture into that repository of unimaginable chaos learned immediately the harsh realities about confronting grave personal danger. 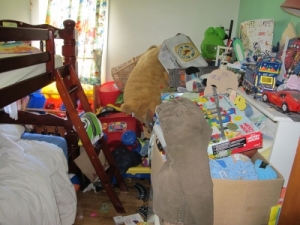 Within minutes my arms were loaded down with kitchen dishes. To each adhered the remnants of objects hinting they were once edible, at sometime during past days, weeks, perhaps even months, all of which now resembled fossils at varying stages of petrification.

Under a plate loaded with the gastronomic detritus of times past, there it was: The Republic of Plato, in all its wondrous splendor!

Later, naturally, Carrie and I spoke of Plato, and to a lesser extent about how it came to pass that Plato had made a pilgrimage from our den to her chaotic boudoir. Seems Plato’s tome had caught her eye and piqued her curiosity on her frequent missions of mercy rescuing me from the vicissitudes of an unforgiving computer. And I’ll be darned if she wasn’t able also to explain some of Plato to me, too. Smart kid, twice over.

“Finding Plato” is Copyright © 2015 By James Osborne. All Rights Reserved